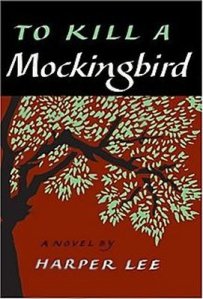 In the sleepy town of Maycomb (Alabama), set in the middle of The Great Depression, Harper Lee brings about timeless themes and skepticism of race, morality and ethics, feminism, and social class. The story is narrated by Scout Finch; a rambunctious, intelligent, and curious child. The majority of the plot revolves around the trial that is about to take place in which her father, Atticus, is defending an African-American man named Tom Robinson, much to the dismay of the small country-town community. Through Scout’s perspective, we are invited to see the world through a child’s eyes that bring to light many devastating truths about society that still resonate with us today.

Taking place in the Jim Crow south, Atticus’s decision to defend Tom Robinson warrants the immediate disproval of those around him. However, as a man who is determined to “walk in others’ shoes”, Atticus empathizes with Tom and does his best to protect him, even going as far as sitting in front of the jailhouse faced by a mob of angry men. As the trial progresses, the hatred and racism of the town is exposed as ultimately Tom is rendered guilty, though there is no sufficient evidence that he ever committed a crime. The jury unjustly sides with Mayella Ewell because she is a white woman, and in the end, Tom Robinson is sent to jail and later gunned down (several times) for trying to escape.

Throughout the novel, Atticus preaches morality to Scout and her brother Jem, and is determined to get them to understand how they should treat people. In addition to the court case, Lee introduces us to Arthur “Boo” Radley, the local recluse who has been locked away in his house for years and only comes out to place small gifts for the children in the tree. Jem, Scout, and their friend Dill are convinced that the Radley house is haunted, and spend much of their time trying to get him to come out of the house so they can see him. At the end of the novel, Boo saves Jem’s life by killing Bob Ewell, and Scout finally sees him as a human being, as opposed to a monster. Although Scout quickly warms up to him, Boo returns to his house never to be seen again.

In the novel, Atticus states that “It’s a sin to kill a mockingbird”, which serves as a metaphor to the world around them. Mockingbirds, as a representation of harmless, innocent creatures, can be seen as the many instances that occur in the novel: the way that African Americans are treated, the way that Boo Radley is treated by the gossiping neighbors and even by the children (at one point) taunting him, and Jem and Scout’s vulnerability to a racist world. In the novel, Atticus teaches us powerful lessons on how we should all be more empathetic towards one another; this being an imperative value that still rings true in present society.

I could not find the full movie online, but I have attached the trailer for the documentary “Hey, Boo” on Harper Lee.

4 thoughts on “Mockingbirds: Symbols of innocence”