I’ll  begin this post by freely admitting that I’m a  bit off topic. And by a bit, I mean these are definitely nowhere on our reading lists. However, inspired by the articles posted for us on the benefits of the graphic novel in adolescent classrooms, I went out to the bookstore and library “exploring” how authors in YA are playing with this idea. What I found was somewhat interesting. 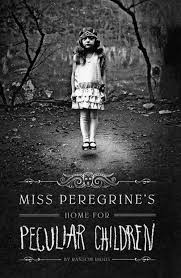 Previously, I had read Ransom Riggs’s Miss Peregrine’s Home for Peculiar Children, a strange jumbly mix of story narrative with creepy pictures used by the author throughout the narrative to tell the story. This is not your basic graphic novel, by any means. It’s actually a novel that just happens to use intriguing photos like hooks to tell the story and keep the students coming. And come they do! I taught this abroad several times and, by the last time I taught it, I had learned either not to hand it out until the end of class or risk losing students to photo ogling for the remainder of class. Alternatively, I could hand it out and assign an in-class writing assignment: pick a picture and write your own story about what’s happening in it. (I personally really enjoyed the creative aspect of the stories the students dreamed up on that one).

To my surprise and curiosity, the author now has a sequel out, Hollow City. I haven’t read it yet, but I have a feeling it’s in much the same vein: weird kids collected in a fantasy situation facing unspeakable big bad things. Notably, I just read an article announcing that the first book in the series is being made into a movie, due out in 2015, and (yay!) being directed by Tim Burton.

However, Riggs isn’t the only author fiddling with this. I just read the notably creepy YA book simply titled Asylum by Madeleine Roux. This is more of a classic haunting/things that scare you and go bump in the night book, but with some classic YA themes sprinkled in for good measure. It, too, uses suggestive photographs throughout to build the tension in the narrative. There are a few differences, though. Where Riggs uses (from what the book notes say) only real photographs, Roux has a few real ones but many engineered ones. Also, where Riggs actively uses the photos to move along the plot, Roux uses hers as more of a prop–an addition to what she’s saying, but not a central one.

AND now that I continue to do research, I see that Miss Peregrine’s has actually been published also as a full-on graphic novel:

I’m thinking that this movement to add a graphic novel in addition to the regular novel may be huge in YA lit–especially with the relative success of (like em or not!) the Twilight saga’s graphic novelization.

I know that there are more books along these lines being published, and it’s not hard to imagine why these would capture the fancy of the teen reader crowd. What do you think? Does anyone know of others out there? Would you give these a try in your classrooms/classroom libraries?

How do Love, Betrayal, and Loss of Innocence affect Deanna’s life? Do you believe these themes affected Deanna choices? Why or Why not?

This question brings up a lot of discussion when analyzing Deanna character.

For example the “loss of Innocence”, demonstrates Deanna coming of age, where she finally began understanding the reality of her choices.

“Betrayal” was demonstrated when Deanna herself, kissed Lee knowing he was with her best friend and that it could have devastating outcomes.

“Love” for Deanna meant two things, the love needed for a parental guidance she seemed to have lost because of her actions with Tommy and the first time an adolescent experiences their first love.

All three themes seem to affect Deanna development and transition into adulthood. Teen’s have a hard time understanding that tomorrow is another day and what seems important today, might not be as important tomorrow. Just imagine to have to experience all these emotions at once. Poor Deanna…

Here a couple of ways to describe some event’s and character’s:

Join 61 other subscribers
Follow Readers Are Leaders 2014 on WordPress.com